Contact between the ascending vapors and the descending condensate concentrates the lower boiling component in the vapor. More contact between liquid and vapor means a better separation. 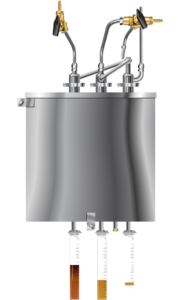 Mono-terpenes have the lowest boiling points, so they are collected first. They can be found in the cold trap receiver due to their low boiling points.

Once all the terpenes are distilled the THC/CBD fraction will start to come over. This is the stuff you’ve been waiting for. The color of the THC distillate is strongly influenced by the extraction process and any post extraction treatments.

When the last of the THC/CBD is collected, the distillation is stopped. The boiling flask typically has less than 2% cannabinoids. Cannabinoid waste is kept to a bare minimum through the efficiency of spinning band distillation.