GW Pharmaceuticals is undertaking a major research programme in the UK to develop and market distinct cannabis-based prescription medicines [THC:CBD, High THC, High CBD] in a range of medical conditions. The cannabis for this programme is grown in a secret location in the UK. It is expected that the product will be marketed in the US in late 2003. GW’s cannabis-based products include selected phytocannabinoids from cannabis plants, including D9 tetrahydrocannabinol (THC) and cannabidiol (CBD). The company is investigating their use in three delivery systems, including sublingual spray, sublingual tablet and inhaled (but not smoked) dosage forms. The technology is protected by patent applications. Four different formulations are currently being investigated, including High THC, THC:CBD (narrow ratio), THC:CBD (broad ratio) and High CBD. GW is also developing a specialist security technology that will be incorporated in all its drug delivery systems. This technology allows for the recording and remote monitoring of patient usage to prevent any potential abuse of its cannabis-based medicines. GW plans to enter into agreements with other companies following phase III development, to secure the best commercialisation terms for its cannabis-based medicines. In June 2003, GW announced that exclusive commercialisation rights for the drug in the UK had been licensed to Bayer AG. The drug will be marketed under the Sativex brand name. This agreement also provides Bayer with an option to expand their license to include the European Union and certain world markets. GW was granted a clinical trial exemption certificate by the Medicines Control Agency to conduct clinical studies with cannabis-based medicines in the UK. The exemption includes investigations in the relief of pain of neurological origin and defects of neurological function in the following indications: multiple sclerosis (MS), spinal cord injury, peripheral nerve injury, central nervous system damage, neuroinvasive cancer, dystonias, cerebral vascular accident and spina bifida, as well as for the relief of pain and inflammation in rheumatoid arthritis and also pain relief in brachial plexus injury. The UK Government stated that it would be willing to amend the Misuse of Drugs Act 1971 to permit the introduction of a cannabis-based medicine. GW stated in its 2002 Annual Report that it was currently conducting five phase III trials of its cannabis derivatives, including a double-blind, placebo-controlled trial with a sublingual spray containing High THC in more than 100 patients with cancer pain in the UK. Also included is a phase III trial of THC:CBD (narrow ratio) being conducted in patients with severe pain due to brachial plexus injury, as are two more phase III trials of THC:CBD (narrow ratio) targeting spasticity and bladder dysfunction in multiple sclerosis patients. Another phase III trial of THC:CBD (narrow ratio) in patients with spinal cord injury is also being conducted. Results from the trials are expected during 2003. Three additional trials are also in the early stages of planning. These trials include a phase I trial of THC:CBD (broad ratio) in patients with inflammatory bowel disease, a phase I trial of High CBD in patients with psychotic disorders such as schizophrenia, and a preclinical trial of High CBD in various CNS disorders (including epilepsy, stroke and head injury). GW Pharmaceuticals submitted an application for approval of cannabis-based medicines to UK regulatory authorities in March 2003. Originally GW hoped to market cannabis-based prescription medicines by 2004, but is now planning for a launch in the UK towards the end of 2003. Several trials for GW’s cannabis derivatives have also been completed, including four randomised, double-blind, placebo-controlled phase III clinical trials conducted in the UK. The trials were initiated by GW in April 2002, to investigate the use of a sublingual spray containing THC:CBD (narrow ratio) in the following medical conditions: pain in spinal cord injury, pain and sleep in MS and spinal cord injury, neuropathic pain in MS and general neuropathic pain (presented as allodynia). Results from these trials show that THC:CBD (narrow ratio) caused statistically significant reductions in neuropathic pain in patients with MS and other conditions. In addition, improvements in other MS symptoms were observed as well. Phase II studies of THC:CBD (narrow ratio) have also been completed in patients with MS, spinal cord injury, neuropathic pain and a small number of patients with peripheral neuropathy secondary to diabetes mellitus or AIDS. A phase II trial of THC:CBD (broad ratio) has also been completed in a small number of patients with rheumatoid arthritis, as has a trial of High CBD in patients with neurogenic symptoms. A phase II trial has also been evaluated with High THC in small numbers of patients for the treatment of perioperative pain. The phase II trials provided positive results and confirmed an excellent safety profile for cannabis-based medicines. GW Pharmaceuticals received an IND approval to commence phase II clinical trials in Canada in patients with chronic pain, multiple sclerosis and spinal cord injury in 2002. Following meetings with the US FDA, Drug Enforcement Agency (DEA), the Office for National Drug Control Policy, and National Institute for Drug Abuse, GW was granted an import license from the DEA and has imported its first cannabis extracts into the US. Preclinical research with these extracts in the US is ongoing. 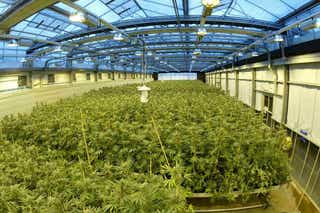 GW was launched more than 20 years ago by Guy, and is a pioneer in the medical benefits of marijuana. Its 2010 drug Sativex, to treat the symptoms of multiple sclerosis, has been approved in 30 countries.

“Over the last two decades they have pioneered Cannabinoid research and product development for the world and I’m particularly delighted to see the commitment to the merged company having ‘a significant presence in the United Kingdom, which is expected to remain an important part of the combined enterprise’.”

Steve Bates, CEO of the BioIndustry Association said: “GW Pharma is a great example of a fantastic UK life sciences business that British entrepreneurs have built in our ecosystem.

The takeover could unlock a fortune for tycoon Geoffrey Guy, GW’s founder and chairman – nicknamed Doctor Pot – whose stake is now thought to be worth around $90 million (£65million).

Jazz, headquartered in Dublin with offices in Oxford and California, said the deal would help bolster its neuroscience unit which generated more than three-quarters of its $600 million sales in the third quarter.

It is used in patients with Dravet Syndrome and Lennox-Gastaut Syndrome, rare childhood-onset forms of epilepsy among the most resistant to treatment.

The $220-a-share offer, of which $200 will be paid in cash and $20 in stock, sent GW’s share-price up 46% to a high of $216.01 as the Nasdaq opened in New York. It is the biggest ever acquisition of a UK biotech company, according to the BioIndustry Association.