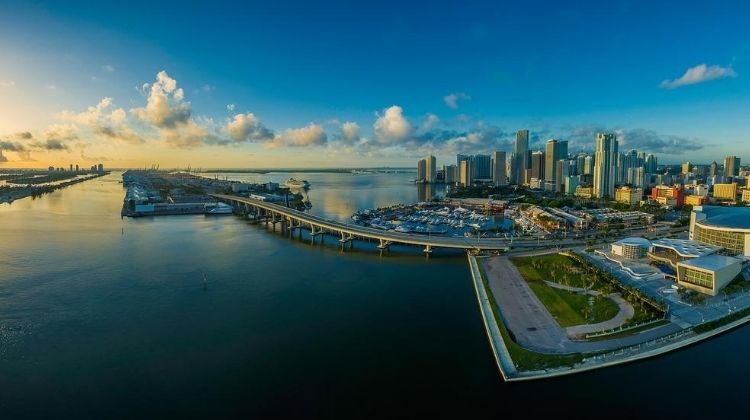 Before the Farm Bill, Florida laws didn’t differentiate between hemp and marijuana, meaning CBD was illegal just as marijuana was. In fact, the Florida Department of Agriculture has outwardly stated that selling CBD products in the state was unlawful.

Such states, therefore, don’t want their residents to buy CBD oil from outside the state, including from online stores, and have them shipped to their homes.

Is CBD Legal In Florida?

However, potential patients are expected to visit a licensed doctor to get approval before getting their MMJ card. So is CBD oil legal in Florida? Honestly, it’s somewhat a no-man’s land situation since there is no official legislation in place that states what is legal and what isn’t.

Florida is one of the states with an active medical marijuana program, but the legislators have been somewhat lenient with non-dispensary stores selling hemp-based CBD oil. They are also not strict on their residents buying CBD oil in Florida from an online retailer and having it shipped to you.

Why You Should Buy CBD Oil Florida Online?

Even with the Farm Bill, individual states still have a right to choose their laws. For instance, states with medical marijuana (MMJ) policies mandate that CBD or cannabis products be distributed and sold in state-licensed dispensaries to maximize state revenue tax from legal cannabis sales.

However, this measure was being implemented to stop the prosecution of people suffering from seizures, who were just a tiny fraction of CBD oil users in Florida. However, things got confusing in terms of CBD oil laws in Florida when the Farm Bill came along the same year and made hemp-based CBD products federally legal. One of the most important things to pay attention to is whether a CBD product is full spectrum, broad spectrum, or isolate.

As research remains ongoing, there is a growing body of evidence pointing to CBD’s potential efficacy in various medical applications.

Broad spectrum means that the product contains CBD and terpenes, but has undergone additional processes to strip out any THC.

CBD laws in Florida have undergone several changes in recent years. In 2014, Florida lawmakers approved SB 1030, which legalized low-THC CBD oil for qualifying medical marijuana patients registered in the state program. Florida’s first rudimentary medical marijuana program made it legal for patients with cancer, muscle spasms, seizures, and terminal illness to obtain a doctor’s recommendation to purchase, possess, and consume medical cannabis containing 10% or more of CBD and no more than .8% of THC.

Where to buy CBD in Florida

The federal legislation places regulations on the production and sale of hemp, including hemp-derived CBD products. The Farm Bill also provides that states may regulate and even prohibit CBD cultivation and commerce. In addition, states may attempt to regulate CBD food, beverage, dietary supplement, and cosmetic products, independently of the FDA finalizing its views on such products.

The Farm Bill also granted the US Food and Drug Administration (FDA) the power to regulate CBD’s labeling, therapeutic claims, and its use as a food additive. Despite the passage of the Farm Bill, the FDA has taken the stance that hemp-derived CBD may not be added to food and beverages, nor marketed as dietary supplements. While the FDA has begun a process of reevaluating its stance on such CBD products, it has yet to revise its rules or specifically regulate CBD products, leading to confusion in the market. The FDA has been strict when it comes to health claims and content that could be construed as medical advice about CBD.

In 2016, voters approved Amendment 2,which significantly expanded the state’s medical marijuana program, but still did not allow for smokable forms of marijuana. After the Florida Supreme Court struck down the ban on smokable marijuana, lawmakers in March 2019 passed SB 182, which was signed by Republican Gov. Ron DeSantis. Today, registered medical marijuana patients have access to medical cannabis products that contain high levels of both THC and CBD.

During this same time period, other more CBD-specific laws in Florida were evolving alongside the medical marijuana program. SB 1020, which was passed by state lawmakers in July 2019, is by far the most important piece of legislation affecting CBD oil in Florida. This law introduced several key changes: