On April 20 (which doubles as 4/20, a day marijuana advocates celebrate), the launch party for Cuvée’s latest offering will have free samples, happy hour pricing and a Q&A with a representative from Natural Plant Extracts so you can learn about hemp and CBD, among other activities.

With the new cold brew — releasing on April 20 at Cuvée’s East Sixth Street coffee bar— Cuvée aims to combine “the functional benefits of hemp oil with the power of caffeine,” according to a press release.

A new canned cold brew from Cuvée Coffee won’t just have the boost of caffeine in it.

Unlike marijuana, hemp has only tiny amounts of tetrahydrocannabinol, or THC, the chemical that gets you high, but it does have more CBD, a substance that is increasingly regarded as having medical benefits.

Cuvée Coffee’s new cold brew is one of the first hemp oil-infused coffee products in the country, according to McKim.

Want the hemp oil in more than just the cold brew? Cuvée Coffee partnered with California-based Natural Plant Extracts USA to prepare a hemp oil product specific for cold brew, and it’s something that customers of the coffee shop can now add to any drink order for an additional $2.50.

“While the exact health benefits of CBD hemp oil are still being researched, this new product is the brainchild of our owner, Mike McKim,” the Facebook event reads. “Mike believes the high caffeine content in cold brew paired with the health benefits of hemp oil can improve your mood, keep you alert and focused, aid physical performance and recovery as well as provide antioxidant qualities.” 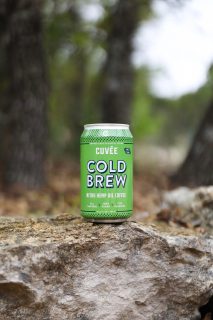 Cuvée Coffee partnered with California based Natural Plant Extracts USA to create a high-quality product specific for cold brew. Each can of the new Nitro Hemp Oil Cold Brew features the same unadulterated caffeine kick customers have grown to love, with zero sugar and five calories per can. In addition, customers visiting the East 6th location in Austin, Texas, can also add 10mg of hemp oil to any drink order for an additional $2.50.

“We’ve always made it our mission to create innovative new spins to our existing products without compromising on quality and flavor,” said Mike McKim, CEO and Founder of Cuvée Coffee “Just as Cuvée Coffee was the first to introduce Nitro Cold Brew in a can to the world in 2014, we’re one of the first to bring customers hemp-oil infused coffee.”

AUSTIN, Texas – Cuvée Coffee, an Austin-based company known for its nitro-infused cold brew, has introduced an innovative Nitro Hemp Oil Cold Brew to its existing line of products. Each can of the Nitro Hemp Oil Cold Brew contains 10mg of odorless, tasteless and water-soluble cannabidiol (CBD) hemp oil for a deliciously smooth taste. The game changing ingredient combines the functional benefits of hemp oil with the power of caffeine to aid in mood improvement, alertness and focus, and physical performance*.

According to a report released by World Health Organization, hemp oil contains higher amounts of other cannabinoids, like CBD that is made from the hemp leaves and stems. Hemp Oil is legal to purchase and sell in all 50 States, can be used as a supplement and is safe to consume. Hemp products do not have THC in any discernible amount, and therefore, do not give people a “high” and are not psychoactive.