Based on the route-dependent pharmacology of medical cannabis and its biphasic effects Dr. Wallace advised practitioners to educate their patients about dosing and preparation form. For example, some patients may go to a dispensary and receive a high dose without proper guidance and, ultimately, worsen their pain. “Controlled dosing from a practitioner will provide for a better outcome,” he explained.

Is the use of cannabis in place of opioids simply trading one problem for another, asked Mark Wallace, MD, at AIPM’s 28 th Annual Meeting in San Diego. A professor of clinical anesthesiology and chair of the Pain Medicine Department at the University of California San Diego, Dr. Wallace set out to answer this question as part of his October 21 keynote presentation on “Science, Politics, and Medicine of the Medical Cannabis for Chronic Pain.” In short, he believes the answer is “no.”

More research is needed on the effect of medical cannabis and a user’s ability to drive, said Dr. Wallace, who admitted that the issue is very controversial. Cannabis “appears to have much less effect on motor skills than alcohol,” but a combination of the two can result in severe impairment, he stated.

Smoking releases everything in the leaf, including tar, which may produce negative health effects, but the vaporized leaf releases selective cannabinoids, as well as some terpenes (ie, the fragrant oils that give marijuana its distinct smell).

To date, 34 states and the District of Columbia (DC) have legalized the use of medical marijuana, while seven states and DC have legalized its recreational use. Legal possession limits range from 2 ounces to 24 ounces, and 15 plants. There are no federal laws legalizing the drug in either capacity, and there is no known lethal dose of cannabis, according to Dr. Wallace. “Cannabis ‘abuse’ is only considered ‘abuse’ because it’s currently illegal,” noted Dr. Wallace in reference to federal guidelines. 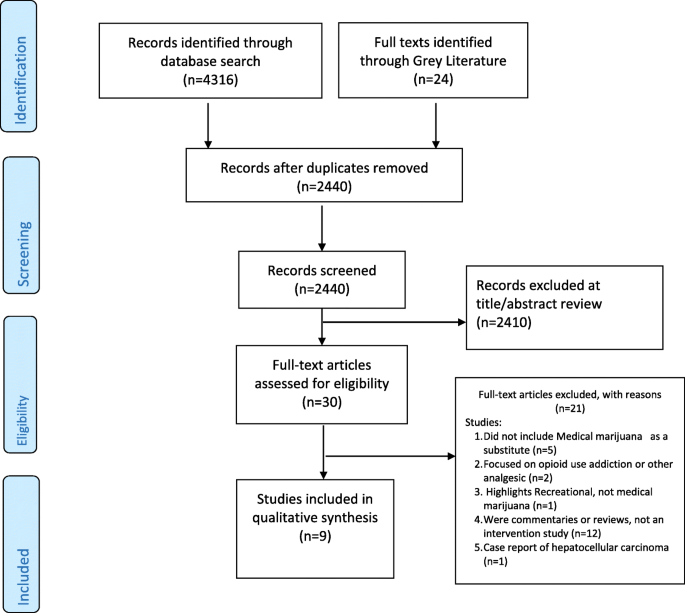 Nine studies involving 7222 participants were included. There was a 64–75% reduction in opioid dosage when used in combination with MC. Use of MC for opioid substitution was reported by 32–59.3% of patients with non-cancer chronic pain. One study reported a slight decrease in mean hospital admissions in the past calendar year (P = .53) and decreased mean emergency department visits in the past calendar year (P = .39) for patients who received MC as an adjunct to opioids in the treatment of non-cancer chronic pain compared to those who did not receive MC. All included studies had high risk of bias, which was mainly due to their methods.

A complete assessment of the risk of bias for the five included cross-sectional studies is presented in Additional file 1. One study [21] had no clear study objectives, and three [21, 23, 24] had poor outcome measurement. Also, it was unclear what was used to determine statistical significance or precision estimates for the studies [21, 23, 24]. In two of the studies [21, 24], the research methods were insufficiently described to facilitate possible replication. Two others [23, 24] had funding sources or conflicts of interest that might affect authors’ interpretation of the results; they contributed 30% (2333/7222) of participants in the systematic review.

Given the current opioid epidemic in the USA and medical cannabis’s recognized analgesic properties, MC could serve as a viable option to achieve opioid dosage reduction in managing non-cancer chronic pain. Unfortunately, the evidence from this review cannot be relied upon to promote MC as an adjunct to opioids in treating non-cancer chronic pain. The nine available studies included in this review suggest that cannabis was effective as an adjunct to opioid in reducing the dosage of opioids in study participants. However, the design of included studies provides a limited basis on which to make a rational, evidence-based recommendation. As the USA grapples with the opioid abuse epidemic and searches for less addictive alternatives, experimental studies are urgently needed to assess the effects of cannabis on non-cancer chronic pain as well as its potential to reduce the need for opioids. If cannabis is found to be effective in reducing non-cancer chronic pain, it could serve as a viable substitute for prescription opioids, thus mitigating the opioid epidemic.

Boehnke and his team surveyed people with fibromyalgia about their use of CBD for treatment of chronic pain.

“CBD is less harmful than THC, as it is non-intoxicating and has less potential for abuse,” said Kevin Boehnke, Ph.D., a research investigator in the Department of Anesthesiology and the Chronic Pain and Fatigue Research Center. “If people can find the same relief without THC’s side effects, CBD may represent a useful harm reduction strategy.”

As the ravages of the opioid epidemic lead many to avoid these powerful painkillers, a significant number of people with fibromyalgia are finding an effective replacement in CBD-containing products, finds a new Michigan Medicine study.

For this study, the team focused on 878 people with fibromyalgia who said they used CBD to get more insight into how they used CBD products.

Yet the finding that products containing only CBD also provided pain relief and were substituted for pain medications is promising and merits future study, noted Boehnke.