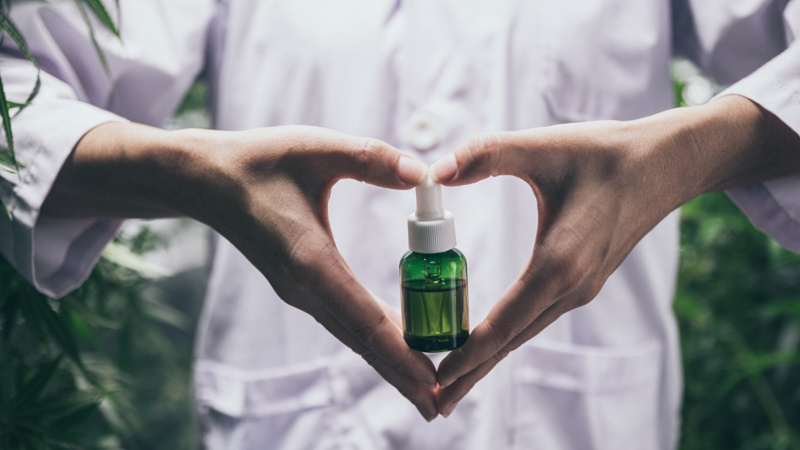 Some users enjoy the additional experience produced by the aromatic vaporization of quality hemp flowers. Even though smoking is also a popular method, it is not ideal for athletes because smoking anything is not optimum for health. Sportspeople looking for concentrated forms of vaporized CBD can opt for CBD e-liquids or dabs.

CBD oils and tinctures are the most compact and easiest to carry and administer. They come in various concentrations/potencies and are often available in multiple flavors. Every CBD tincture has a dropper attached to its bottle; the dropper makes it easier to measure your dose of CBD and transfer it under the tongue.

Many studies have already concluded that have shown promising results when using CBD to promote various desirable effects related to recovery, weight management, relaxation, digestion, sleep, and healing. All of these directly help with bodybuilding by allowing the body to cope with grueling exercise regimes and recover better.

CBD can reduce anxiety and physical discomfort, helping individuals achieve better sleep. On top of that, it may also work as a wake-inducing agent when you take it in the morning — increasing your daytime alertness. This, in turn, causes your brain to be more productive throughout the day. As a result, your body receives proper signals from the brain, indicating that it’s time to get some rest. Many athletes are using CBD oil to regulate circadian rhythm.

CBD is often suggested for managing common sports problems like muscle soreness, recovery periods, injury healing, and getting enough rest. Full-Spectrum extracts, with their terpenes, are considered the most effective option for bodybuilding.

Some studies also suggest no correlation between CBD’s effect on sleep, which remains a common self-reported improvement amongst many users, including athletes who were part of another study.

There is no direct evidence of CBD helping with muscle growth. It is even suspected that it might slow down muscle growth by lowering protein production. However, it has indirect benefits that improve the likelihood of increasing muscle mass.

CBD has also been shown to have positive effects on digestion. It helps to reduce problems with digestion by working on the nervous and the immune system simultaneously. Researchers have hope for using CBD as a therapeutic agent in metabolic issues.

Nina created CFAH.org following the birth of her second child. She was a science and math teacher for 6 years prior to becoming a parent — teaching in schools in White Plains, New York and later in Paterson, New Jersey.

The benefits of CBD seem to come from its effects on the endocannabinoid system, a system in the human body discovered recently (1992) that serves as a “motherboard” for most major organ system. The primary difference between marijuana and hemp-derived CBD is that CBD cannot get you high. A high-quality, high-purity CBD has just 0.3% of THC, about 400-600 times less THC than found in marijuana products. Think of CBD as decaf and marijuana as triple espresso.

A review in the FASEB Journal looked at the effects of CBD on chronic inflammation, exploring potential mechanisms and upsides of using CBD. The researchers noted that not only does CBD act on inflammation through different mechanisms than NSAIDs, but it is also free from the adverse effects of NSAIDs like stomach problems and hemorrhage.

There is plenty of press around the benefits of CBD, but for every positive news clip, there’s a doubter ready to throw cold water on this so-called miracle oil. So what’s the truth? Well, it’s a bit more complex than it seems, so we decided to put CBD on trial.

Though CBD may demonstrate some of the said benefits, it’s structurally too similar to its chemical cousin, marijuana, which causes concern about its use. Furthermore, you can easily get CBD’s same potential benefits from non-steroidal anti-inflammatory products (NSAID) like ibuprofen.

Hemp-derived cannabidiol–CBD for short—has anti-inflammatory and anti-anxiety effects, thereby helping with pain relief. These benefits come with no known serious side effects.

A study published in 2018 in Cellular Immunology evaluated the effects of CBD on the inflammatory and recovery of function after spinal cord injury in mice. The CBD-treated mice showed a significant decrease in inflammation.