Introduction: Discovered in the 1990s, the endocannabinoid system (ECS) is involved with maintaining cellular homeostasis by downregulating the damaging inflammatory response and upregulating regenerative processes. Cannabidiol (CBD) has novel therapeutic effects, different from and synergistic with current hair regrowth therapies. CBD is fat-soluble and poorly absorbed past the epidermis, but topical application of CBD easily reaches hair follicles where it is a CB1 antagonist and agonist of vanilloid receptor-1 (TRPV1) and vanilloid receptor-4 (TRPV4). All these ECS receptors relate to hair follicle function. Blocking the CB1 receptor on the hair follicle with CBD has been shown to result in hair shaft elongation; in addition, the hair follicle cycle (anagen, catagen, and telogen phases) is controlled by TRPV1. The effects of CBD on hair growth are dose dependent and higher doses may result in premature entry into the catagen phase via a different receptor known as TRPV4. CBD has also been shown to increase Wnt signaling, which causes dermal progenitor cells to differentiate into new hair follicles and maintains anagen phase of the hair cycle.

Methods: A study was done of 35 (28 men and 7 women) subjects with AGA. Participants used a once daily topical CBD formulation, averaging about 3-4mg per day for 6 months. A hair count of the greatest area of alopecia was carried out before treatment started and after 6 months of treatment. To facilitate consistent hair count analysis, a clear acrylic mold, containing a 1cm 2 cutout, was made of each subject’s head.

Discussion: Though the exact mechanism of therapeutic effects is not known, CBD is most likely functioning as a CB1 receptor antagonist and potentially also via Wnt messaging. Topical CBD formulation has comparable results to finasteride and comparable results to 5% minoxidil once daily foam. Since the CBD works through novel mechanisms different from finasteride and minoxidil, it can be used in conjunction with these current drugs and would be expected to have synergistic effects. However, safety of this combination would need to be evaluated. 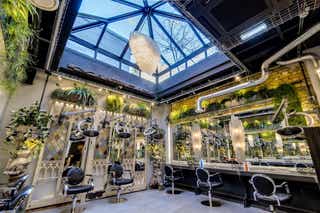 It’s rich in the fatty acids omega 3 and omega 6 and also contains high doses of calcium, phosphorus, magnesium, potassium and vitamin E – all of which are great for the skin (and scalp).

Hari, Founder of Hari’s hairdressers, is convinced of its benefits for hair. “CBD increases blood circulation therefore when used in our in-salon, Hari’s CBD Life Force Hair Treatment, it promotes hair growth and healthy hair production,” he says. “In addition, the CBD Oil balances sebum production so it’s great for both oily and dry or problem scalps helping to address a variety of hair and scalp complaints.”

While the medical benefits of CBD are as yet unproven, many take it orally (for pain, anxiety, depression) and topically for conditions such as eczema and psoriasis.

However, until now, it’s not really made its way into the world of salon treatments. Which is why when we heard Hari’s Fulham Road salon had launched London’s first ever in-salon CBD hair treatment, we couldn’t wait to give it a go.

CBD, also known as cannabidiol, is one of 104 chemical compounds found in the marijuana plant. Tetrahydrocannabinol (THC) is the main psychoactive substance found in cannabis but unlike THC, CBD is not psychoactive.