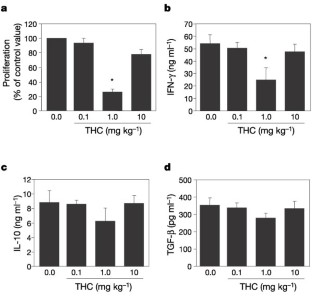 “The findings by Steffens et al are striking, but they should not be taken to mean that smoking marijuana is beneficial for the heart,” he cautioned. “The dose-response curve to THC in this study was very narrow and U-shaped, with higher and lower concentrations failing to produce protective effects. It would be difficult to achieve such specific concentrations in the blood by smoking marijuana.”

Dr Michael Roth (David Geffen School of Medicine, Los Angeles, CA), the author of an accompanying News and Views with the published paper, said it is important not to misinterpret the data.

To unravel the possible mechanism of action, an analysis of the lesions in the THC-treated mice revealed these mice had fewer plaque-infiltrating macrophages than the control mice. Vascular microscopy also revealed significantly reduced leukocyte adhesion in the mice treated with THC, suggesting an effect on immune function, write the authors. These immunosuppressive properties of THC were confirmed in vitro, with spleen cells extracted from the mice showing limited proliferation and impaired production of interferon-, a cytokine involved in atherosclerosis, and reduced leukocyte migration.

Smoking marijuana still bad for you!

Roth notes that THC binds to and activates the CB1 and CB2 receptors with similar affinity. Smoking marijuana exerts its psychotropic influence mainly by binding to CB1 receptors in the brain, resulting in an increase in blood pressure and pulse rate. “These effects lower the exercise threshold for angina and are an independent risk factor for heart attack and stroke,” he writes. Moreover, smoking marijuana also increases the concentration of carboxyhemoglobin in the blood, impairing oxygen delivery. He agreed with the researchers, writing that the advantage of these positive effects will mean developing drugs that target the CB2 receptor alone.

In this study, Steffens and colleagues fed apolipoprotein-E-knockout mice a high-cholesterol diet for five weeks. After five weeks, half of the mice were treated with 1 mg/kg THC for six weeks and the other half served as controls. After 11 weeks on the high-cholesterol diet, there was a marked progression of atherosclerotic lesions in the aortic roots of the control mice, but disease progression was significantly slowed in the THC-treated mice. To confirm that the antiatherosclerotic effect was mediated through the CB2 receptor, experiments were performed with THC in the presence of a CB2 antagonist. They found that the inhibitory effect of THC on atherosclerotic lesion progression was completely abolished in the presence of the antagonist.

Previous studies have highlighted various immunosuppressive and anti-inflammatory effects of THC, the major active component of marijuana. In support of the immunomodulatory role of cannabinoids, the CB2 receptor has been identified on several types of immune cells, including -cells, T-cells, and monocytes. The researchers hypothesized that THC could alter inflammatory processes crucial in atherosclerosis, thus limiting disease progression.

Geneva, Switzerland – Treatment with low-dose -9-tetrahydrocannabinol (THC) significantly reduced atherosclerotic disease progression in mice, exerting its influence through a pleiotropic effect on immune function, according to the results of a recent study. Researchers suggest that THC and other cannabinoids, which are active at CB2, the cannabinoid receptor expressed on immune cells, may be valuable in treating atherosclerosis.