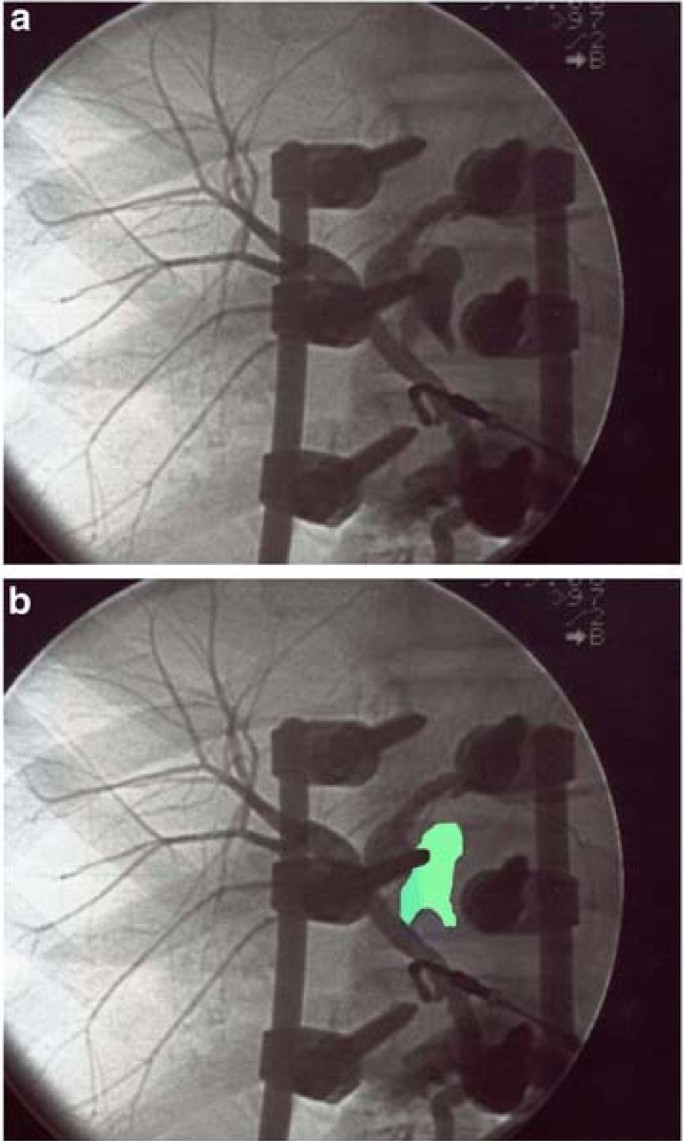 The treatment options for an extrahepatic biliary leak have broadened. Until recently, such injuries usually mandated surgical repair utilizing debridement and closure with or without T-tube; patch closure using gallbladder, cystic duct, vein, serosa or jejunum; biliary enteric anastomosis using duodenum or jejunum; or ligation and drainage with plans for subsequent enteric diversion [32]. When the only relative indication for surgery is the bile leak, nonoperative management is possible [33].

On hospital day 11, because of a clinical and biological deterioration with a significant increase in the hepatic cholestatic enzymes and the detection of diffuse peritoneal fluid at ultrasound, the patient was reoperated on, for the second time, by the laparoscopic approach: a biliary peritonitis was found and the peritoneal biliary fluid (1000 ml) was aspirated; some inflammatory adhesions were present in the gallbladder region. After conversion to open surgery, no evident injury was found after careful surgical exploration. Cholecystectomy with intraoperative cholangiography was performed. No evidence of bile leakage was detected.

In our case, the delay of the adequate treatment was due to the late onset or identification of an evident biliary peritoneal fluid, and to the difficulty in locating bile leakage.

In front of a doubtful splenic injury managed non operatively, only vertebral fracture was treated: posterior osteosynthesis in T10-L1 with laminectomy in T10-T12 and posterolateral arthrodesis in T11-T12 was performed.

On hospital day 13, in front of a further clinical and biological deterioration associated with a bilious fluid drained from surgical drain positioned into the subhepatic area, the patient was finally transferred to a highly specialised hepatobiliary surgical Division.

The diagnosis of post-traumatic biliary fistula with generalized peritonitis was considered, requiring urgent surgery. Intraoperatively, there was no evidence of injury; the biliary peritonitis was confirmed; peritoneal lavage was performed; a trans-cystic duct methylene blue injection was performed to look for biliary leakage, but no leak could be detected by this method; finally an intraoperative trans-cystic cholangiography, hampered by the presence of material for vertebral osteosynthesis and consequently performed in different oblique plans, allowed the detection of biliary leakage on the left posterolateral aspect of the common bile duct, one cm below the biliary confluence (Figure 1); because of inflammatory changes due to the peritonitis, the dissection and the direct approach to the biliary leak was considered hazardous; the residual cystic duct stump was excised, and a T-tube was placed into the common bile duct; a subhepatic drainage was placed too.

On postoperative day 30, a T-tube cholangiography showed a normal biliary tree, without neither leakage nor stricture. The T-tube was subsequently removed and the patient was discharged from the intensive care unit. The patient had a complete recovery. 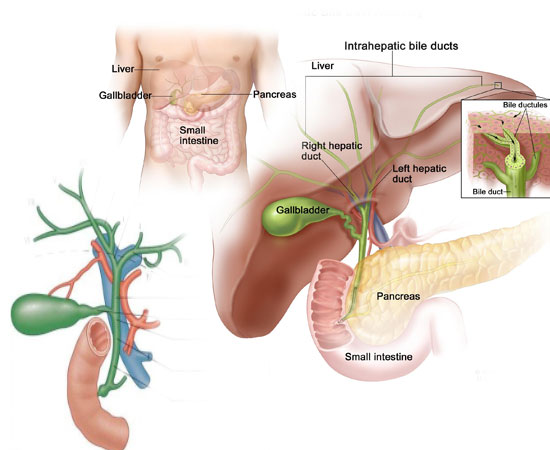 What are the symptoms?

• Extrahepatic ducts: The extrahepatic ducts begin as two parts, one on the right of the liver and the other on the left. As they descend from the liver, they unite to form the common hepatic duct. This runs directly toward the small intestine.

The pain caused by gallstones in the bile duct can be sporadic, or it can linger. The pain may be mild at times and then suddenly severe. Severe pain may require emergency medical treatment. The most severe symptoms may be confused with a cardiac event like a heart attack.